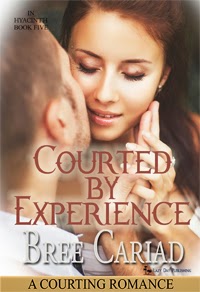 Welcome to another Coming Soon Sundays post. This week, I’m featuring Bree Cariad’s upcoming book Courted by Experience, which is the fifth book in the In Hyacinth Courting Romance series.

Celia Compton is thrilled to be back in Hyacinth where she lived until she was eight. A year of courting to meet her prince sounds lovely, especially when combined with loving discipline. Unfortunately, sometimes reality doesn’t quite meet up with fantasy. The man she wants, Marcus Hotham, seems inclined not to court and yet the more she sees him, the more the rest of the guys just don’t measure up.

As Celia learns more about Hyacinth life and gains friendships for the first time in over a decade, it becomes more like home. When Marcus finally asks to court her, his four-year-old daughter Vanna in tow, she’s thrilled. Everything is perfect, until her mother, who hates discipline and Hyacinth, comes to town and finds out about Marcus. Now, with the possibility of being ripped from the arms of the man she loves, Celia finds herself floundering with how to explain things. When decisions are made and everything comes to light, she just might find that sometimes reality is so much better than fantasy.

“Oh. Well, um…” She tried to search for something to say, but while Cory was sort of cute, he wasn’t really her type. Tall and lean with short brown hair, he had a baby face. Plus, she had always been attracted to smart men. Him not having been to college was a major minus in her book. Or was she being too picky?

“Well, I want to make sure Celie meets plenty of people,” Nana said, rescuing her.

“It was nice to meet you,” Cory said and she smiled and nodded.

“Cory’s a nice boy,” Nana said as they walked along, “but not strong enough for you, honey. You’d walk all over the poor kid. Neither of you would be happy with the result.”

Letting out a whoosh of relief, Celie nodded. “I really like intelligent guys.”

Laughing, Nana nodded. “Well, we have those too. Come, let me introduce you to some.”

She met four men in quick succession, all of them with college degrees. Two she found it easy to converse with, the other two not at all.

“See,” her grandmother said in amusement. “The picnic is kind of like husband shopping. This way when the dinner requests come in, you’ll already have some idea of who the guy is and if you might want to actually get to know him.”

“Husband shopping, the Hyacinth way.” Celia giggled, blushing when a burst of laughter came from her left and she turned to see a man in his early thirties grinning at her.

“Well, I’ve never quite heard it described that way,” he said with a chuckle. Turning to her grandmother, he bowed his head respectfully. “Mrs. Compton. It’s a pleasure to see you again.” A little girl in a dress tugged at his pants leg, completely ignoring the two of them.

“Thank you, Dr. Hotham. How are you and your daughter enjoying the picnic?”

“It’s wonderful,” he said with a large smile, leaning down to pick up the little girl. Whereas he had short brown hair that was turning gray at his temples and brown eyes, his daughter had long curly red hair and hazel eyes. “Vanna’s having a blast. Aren’t you, pumpkin?”

The little girl hid her head in his neck and nodded. He turned his head toward Celie and when her grandmother didn’t introduce her, she did it herself. “I’m Celia Compton, Jude’s granddaughter.”

“Marcus Hotham,” he said, shaking her hand with a firm, but not demoralizing grip. “New vet in town.” His palm was warm and it sent shivers straight to her stomach. She’d never felt anything quite like it.

You can now Pre-Buy on Amazon

Or Add to your ‘to be read’ pile on Goodreads.

Where you can find Bree online:

I’m excited to share with you a little more from Learning to Live Again by Ruth Staunton, the last book from Corbin’s Bend Season […]

It’s another wonderful weekend, and this week I’m doing both Seductive Studs and Rainbow Snippets all in one. Don’t miss the chance […]

Happy Spanking Saturday! I’m giving you another look at Finding His Home, a Men of Falcon Pointe novel coming out Feb 26th. […]

Yes! Took My Breath Away, 2nd in the All They Ever Needed series is now available! Are you as excited as I […]