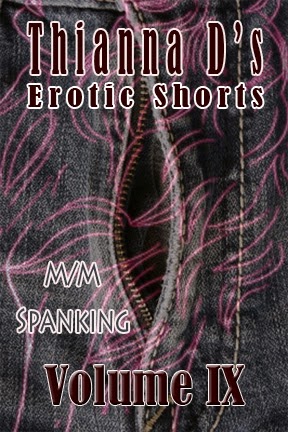 And another Seductive Studs & Sirens is upon us. Woot! Gotta love these weekly chances to buy more books…or is it just me? I read all the snippets and before I know what’s happening, I have several new books.

* * * * *
“I love you,” Trevor chuckled, pulling him forward for a kiss.
“Love you, too,” Jason murmured back, grinning as his boyfriend pushed him backward. As his pounding, hot buttocks made contact with the rough quilt, he let out a squeak. At first Trevor looked at him strangely and then his eyes darted to the problem. Laughter burst from the man leaning over him until he collapsed on top of him still laughing. “This is funny?”
Chuckling, Trevor pulled back and smiled at him. “I wish I had recorded that sound. You sounded like a chipmunk.”
“I did not!” But he couldn’t be angry as the laughter still coming from his love just seemed to embrace him. Grinning up at him, he sucked in some air and blew out his cheeks, trying to look like the varmint. As Trevor collapsed into laughter, Jason felt lighter than he had in days… maybe weeks.
Maybe the discipline wasn’t just for him. Maybe Trevor needed to give it just as much as he needed to receive it. Smiling at the realization, he turned onto his side and pulled him close. As Trevor’s arms encircled him, he sighed in contentment. That is until Trevor tapped on Jason’s ass lightly making him squeak again.
“My little chipmunk,” Trevor snickered making him laugh.
* * * * *

Habetolos Hardware: Gerrard went to the hardware store to get some things for his business. On aisle 12, he found there was more to see than just siding.

Scattered: Jason didn’t mean to make Trevor worried. He just forgets sometimes. Today, he will find out the pain and the forgiveness a spanking can provide.

Get On With It, Old Man!: Excerpt from Hand of God by Raya Ezelle – Jeremy has a lot of deep anger toward his old religious leader only to find he needs him now.

Boom!: Roger loves his partner, but is not as excited to spend July Fourth with Craig’s family. When he loses it, Craig shows him in several ways just what it means to be in a loving domestic discipline relationship.

Twenty-Seven: Excerpt from As Natural As Breathing – Logan introduces Christian to a few spanking implements. It is his birthday, after all.

An excerpt from Breathe Each Other In for #WipItUp

A #NSW snippet for #SatSpanks from Marked by Shadow

Hey, Saturday Spankos! Yeah, I know I haven’t done SatSpanks for awhile. There’s been a reason, but I figured with my new […]

Welcome to the My Ice Cream Brings All The Boys To The Yard blog hop! This is the first of hopefully many […]