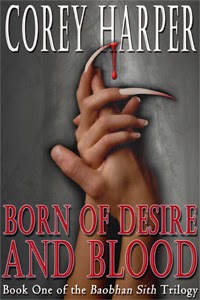 His thirst for vengeance. Her desire for his touch. Their chase through eternity.

“Kenzi” Katherine MacKenzie is being hunted by Duncan Munroe. For four hundred years he has searched for her, their immortal baobhan sith bodies immune to age, her crime against him driving his thirst for vengeance. His need to be free of the sith curse.

But what he discovers when he captures her—what they both discover in each other—upends their centuries-long chase into something far greater. Something frightening.

Thank you, Thianna, for having me here for the release of my book today.

In the following snippet, Duncan is giving chase across the Northern California hillsides on a moonlit night, and is about to capture an impish and naughty Kenzi.
And by the way, Duncan and Kenzi are special, in an immortal, nearly-invulnerable sort of way: they are baobhan sith.
* * * * *
Kenzi rocketed up a hill in front of him, and the incline did not slow her at all. Duncan followed, again closing the gap. She wasn’t going to escape this time!
His erection strained at his jeans, and he longed to remove them and allow his brute complete freedom. But first, he would capture his prey and strip the remaining shreds of cloth from her glorious body.
He wanted to devour her. He wanted to slide his tongue across her throat, stopping at her pulsating vein, just long enough to make her wonder, Will he?, and then glide wet and hot across her graceful collarbone, down her chest, to her swollen breasts…
He was almost upon her.
“Hi, Kenzi,” he said from three feet behind her.
He heard her gasp, and she tossed a look over her shoulder. “No, you don’t!” she laughed. Like before, she darted to the side, but he was there.
And there.
And there!
Kenzi stumbled in confusion, but stayed on her feet, still running. He knew what she was wondering—how could he be in three places at the same time?
He would teach her the trick later, but now—
He waited, and she flitted to her right, away from one of the many Duncans that seemed to surround her. And right into his waiting arms.
“Hello, my darling,” he said, scooping her up into his arms and running towards the top of the hill, where a giant boulder lay half–buried in the soil.
Kenzi gasped a huge breath, her eyes locked on his in amazement as he carried her. Her heart, so relaxed during her run, now threatened to pound from her milky chest.
“How—?” she panted, not from exertion, but the excitement that he had captured her. She put her palms against his chest, pushing a little, but they both knew the chase was over. Her eyes shone in the moonlight.
“I have you, my darling,” he said, kissing her forehead as he slowed at the top of the hill. “You are mine.”
She shivered in his arms, and put hers around his neck, her hands fisting in his hair. “You don’t play fair,” she protested, resting her head on his broad chest.
“And I never will,” he said. “Not when it comes to capturing the girl of my dreams.”
She trembled again. “Promise?”
“Promise.”
He reached the boulder at the top, sought the flattened part he knew was there, sat on it, nestling her into his lap. His land surrounded them; no one around for miles. No one to hear.
“Now what am I to do with my naughty little girl?” he wondered, looking sternly at her.
“Oooh,” she sighed, going limp under his darkening gaze. “Anything you want.”
Without warning, he flipped her over and threw her across his knees, her naked bottom upwards, her belly lying against his left leg, her heavy breasts hanging.
“What… what are you doing?” She half–giggled, half–trembled. But he could hear her heart race as he stroked his hand across the smooth skin of her buttocks, so he knew her fear was the kind she had sought from him.
“What happens to all naughty girls,” he said, deepening his voice, and she rewarded him with another shiver. He caressed her bottom more firmly.
“Will it hurt?”
“Do you want it to?”
She was silent a moment, then said in a small voice, “Yes.”
“Good.”
“Does that make me a slut?”
He bent forward and kissed her left ass cheek, then the right. He slid his tongue across both, then down the cleft between. He paused a moment at the tight rosette, gave it a flick with his tongue, and she jumped, then quivered like a trapped fawn.
“It makes you my slut,” he growled.
* * * * *
Corey Harper writes erotic romance fiction, mostly paranormal, all with M/f D/s spice. (Spanking may be included.) And always with a HEA (Happily Ever After).
He writes characters that lead with their hearts, think with their brains, and explore their passions with everything else.
And yes, he is a Dom.
To learn more about him, and why a man like him writes erotic romance stories, read his Smashwords interview.
To purchase Born of Desire and Blood, or just to learn more about it and its author, check out the following links:
Purchase at:
Smashwords
Barnes and Noble
Amazon
Find out more at:
Corey’s Facebook Author Page
Corey’s Blog
Official Book Page

Title caught your attention? Today on the As Natural As Breathing Book Blog Tour, I am over on Kate Richard’s Batteries Not […]

Hope you’re enjoying my 24 hours of cover reveals. LOL. Or at least that’s how it feels. Yesterday I revealed the cover […]

Hello, fellow spankofiles:) How is your Saturday going? Gotten enough spanks yet? No? Good, cause I have a good one for ya’. […]