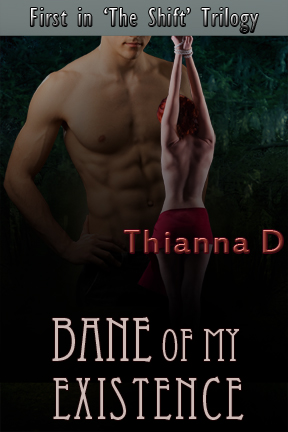 This week I’m bringing up Bane of My Existence, which is the first in The Shift trilogy (I’m working on 2 & 3 now so they can be released relatively close together.)

She blinked and her mouth opened to say something, but her brain could not put two thoughts together. The man standing in front of her exuded power in a way she had never even considered before. It was terrifying and thrilling at the same time. At well over six feet tall, he towered over her seated form. In the dark light of the room his face was partially in shadow; but what she could see was angular and firm. His expression made her feel as if she was being examined. She swallowed hard.
Chuckling softly, he strode around the table, like a cat circling its prey, and sat down facing her. Even in the darkened room, his features stood out. High cheekbones, thin course eyebrows, short dark hair, and the most intense eyes she had ever seen. “So you are here to apply for a position.” It was not a question and she couldn’t think of anything to say so she just nodded. “Have you ever been to a fetish club before, little one?”
Little one? Inside she fumed at the perceived put-down and that gave her the gumption to speak. “No, I have not. If Kayle hadn’t forced me to come, I wouldn’t be here now.”
His eyebrow raised and for some reason it made her feel like a child who had been bad. For the first time in years, she blushed. Amusement crossed his face. “Ah, you are here with Master Kayle. I should have known by the wrist band.”

Bane of My Existence available from:

Today feels like the dawn of a new day. Not only did I get my new look going for my blog but […]

Hello Seductive Studs & Sirens! How’s your Saturday going? Thought I’d give you another little taste of Blake & Dusty. Dusty has […]

Kace & Falcon have a reunion for #SatSpanks