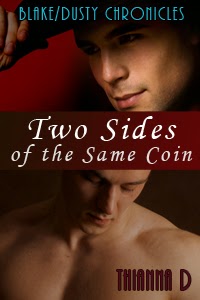 Welcome to another week of Seductive Studs & Sirens. Ready to get your fill of some great LGBT fiction? I know I am!

This week I am thrilled to give you a snippet from The Blake/Dusty Chronicles: Two Sides of the Same Coin which will be out soon. Originally written and released as 10 1st-person short stories, I have completely re-written it into 3rd person, removed scenes that no longer fit, added new scenes I always wondered about, and completed it into an 86,000+ word novel. Can you say excited?

This scene is from the very beginning, part of the new Prologue.

* * * * *
Walking through the doorway Dusty Brandon held back the sigh that wanted to leave his lips as the conversation in the room stalled slightly. It had been that way ever since he came out years ago. His whole damned family never knew what to say when he was around. Except for his Uncle Larry who winked at him across the room.
“‘Bout time you got here!” Larry bellowed.
Grinning, he strode through the throngs of uncles, aunts, and cousins over to a man he loved. “Happy Holidays, Uncle,” he said, giving him a hug.
“Same to you. How’s business?” Larry asked as the conversations in the room began to pick up again.
“Good. Have several new deals in the works. Found out about a company in Seattle that might be worth lookin’ into. They would add a lot. And life’s good.”
It was just the quirk of an eyebrow that told him his uncle was not in the least convinced. “Sure it is. Any new man on the horizon?”
* * * * *

Getting down to brass tacks for #SatSpanks

Happy Saturday, Spankos 🙂 With everything going on in my life – 1-2 releases per month, studying for more web development certifications, […]

When I write a series, especially one that is bound around a community concept, I like a series logo. That logo states clearly what […]

10 thoughts on “Any new man on the horizon? #SeductiveSnS”