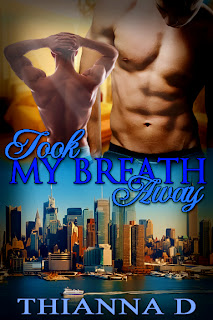 Happy Saturday, Seductive Studs & Sirens! Hope you are having a fantabulous day! I am. Not only is it the new year and wonderful things are happening, but I am coming off the two week Took My Breath Away book blog tour.

Let me tell you, it was a great way to send 2013 off with a BANG! Oh, and if you haven’t been here before? Consider my stuff NSFW. 😉

So, I thought I would give you a little fireworks for the first #SeductiveSnS post of 2014. There is still much coming for Christian and Logan this year, but for now?

Took My Breath Away
Sequel to As Natural As Breathing

Sometimes taking control is what you need to do and sometimes the best thing you can do is give that control up.

In the summer between Logan’s junior and senior years of college, these two will find out more about each other and themselves than they imagined.

While unhappy to be missing four weeks of Christian’s company, Logan is thrilled to spend a month with his father’s relatives in New York.  A naturally gregarious individual, he is used to winning people over and getting things right. Unfortunately, the Mannettes are not what he expects and for the first time in his life, he finds himself seriously doubting who he is.

Christian has regained some of his old self-esteem and is taking on new challenges. Besides growing in the relationship he has with Logan, he takes the time his boyfriend is away to learn more about domestic discipline. He learns a little online but it is actually Gregory, Logan’s father, where he gains most of his information. Including the fact that his natural strength puts him in a leadership position he isn’t expecting.

When Logan returns to a strong, self-assured Christian, it is with complete relief. As discussions turn to domestic discipline and they realize their true roles within their current and future relationship, both of them are able to let their inhibitions go and together their connection grows surprising Logan to an epiphany.

Corbin’s Bend Safe, Secure, and Spanked in Colorado It’s coming! Can you feel it? On January 2nd, you will get your first […]

Hello everyone! A happy, sexy Sunday to you all! Welcome to the fun. What fun you say? *gasp* Where authors/bloggers give you […]

Got Volume III for this week’s Backlist blast. Volume III deals with things that go bump in the night. Yes, they grind […]

8 thoughts on “Before you, I was a gentleman #SeductiveSnS #gay #spanking #romance”