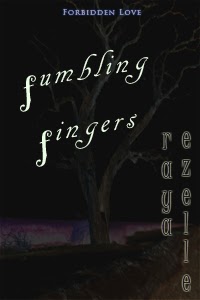 Hello Seductive Studs & Sirens bloghoppers! How are you doing this fine Saturday?

I hope fantastic as we have a wonderful lineup of treats for you this week. Today I am giving you a look into Fumbling Fingers by Raya Ezelle.

Cody has a problem. He’s in love. With a man 3 years older than he is. As if that isn’t enough of a problem, the man in question is his uncle. This scene is a flashback to when he first really figured it out.

******
Only three years older than him, Micah and he had been friends since he was in diapers. But catching sight of him in the shower the day before, one look at Micah’s long dick and he had to run back to his room and rub one out.
That he was turned on by guys wasn’t a surprise. He knew since he was ten that he preferred boys over girls. But Micah was his uncle, his mother’s youngest brother. He was sure that was wrong. So why did it feel so right?
“Well, look who’s here,” Micah laughed, plopping down by him on the deck after he cast his reel. “Carlyn said you were out fishin’. I figured you would come here.”
“Yeah,” Cody said, not knowing how to respond, especially as his eyes fastened on the bulge in Micah’s pants. Realizing what he was doing, he turned pink and looked back out at his fishing line.
******

19-year-old Cody is in love with Micah and intends to tell him over the holiday. The only two things standing in their way? His mother banished Micah because of his homosexuality and Micah is her youngest brother, Cody’s 22-year-old uncle.

Warning: This book contains subject matter that some may find objectionable including sex of an incestuous nature. Don’t like? Don’t buy and read.

Check out this great snippet on #CSSundays from Karen Bovenmyer: “Swift for the Sun” coming March 27th from Dreamspinner Press

Hey, and welcome to another wonderful My Sexy Saturday bloghop, where authors give snippets from their work. I’m giving 7 sentences from […]

6 thoughts on “He preferred boys. Well, one boy really… #SeductiveSnS”