Today I am thrilled to introduce you to Serena’s Decision, book three in The Torn Series by Suzy Ayers. 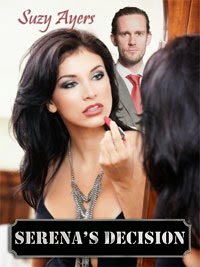 Max confessed his indiscretion, despite their contract stating their open relationship. Can she get beyond wanting more from him? Or will her heart lead her to another? Will she continue to want even a Dom/sub relationship? Can she finally expose her past?

Let’s see where Serena’s heart leads her in this final book in the series.

******
His eyes were locked onto hers, as if drawn together by some unseen force. He pushed the chocolate locks behind her shoulder and slowly moved in, still watching her reaction. His lips touched her skin, leaving kisses and bite marks on their way down to her collarbone. His hands came to the front of the shirt, making short work of the buttons on the white blouse. Both hands pushed the soft material open, exposing her chest to him. He slipped the material over and off her shoulders.
Serena gasped, as he reached around and unclasped her bra next. She could smell her sweet musk penetrating through her pinstripe pants and working its way between their bodies. Her breath was in deep long rhythms, as he continued to softly kiss and mar her flesh with gentle bites. She held on to the window sill and took all she could handle.
“Please,” she whispered.
“Serena, I’ll stop if you want. I have to admit, I missed you.” Max pulled back and looked at her, while he spoke.
“I,” she swallowed hard.
“Go ahead, kitten.”
The word rolled off his tongue so beautifully and made her blush.
“Will you spank me? I’m not sure about sex. I just-” Her eyes danced around his and she tensed a bit.
“Serena, relax. Spanking and lunch.” He grinned, pretending to ponder it. “Get naked. I want to see all of you. Even if I don’t get to feast on you, at least let my eyes wander on your flesh.”
******

Suzy Ayers is a Bestselling Author of “Sara’s Awakening” in Fantasy (Metaphysical/Visionary). She has multiple Erotica titles that have also been in the Amazon Bestseller lists within the free categories.

Her main focus is Romance, which crosses many genres including: Erotica, Fantasy and coming soon Paranormal. Her short stories and books twist into happily-for-now or happily-ever-after’s.
Suzy attempts to write in a manner that pulls you into the erotic event and paints an explicit scene of lust and passion. Her purpose of expressing it in this manner is that she believes that sex and love are intertwined and are healthy expressions of the human heart. Her writing depicts true to life characters with flaws and showcases that the world is sometimes sad; people are not one dimensional shells. We somehow become stronger and this to her is beautiful.

“Master-bation, At Sir’s Command (The Torn Series: Book 1)” focus’s mainly on the namesake in the beginning, however the scenes develop throughout the book. The reason behind the self-learning is to help Serena and Max learn what she likes and can tolerate.

“Sir’s Deception (The Torn Series: Book 2)” showcases both of their desires building for each other, however it seems neither wants to admit it. Mykel is introduced, a friend of Max’s. Also some element of danger creeps in for Serena. While Max goes to a convention and you decide is he unfaithful or not, despite his open relationship clause.

“Serena’s Decision (The Torn Series: Book 3)” Serena meets another man, Glen. He’s about her age, muscled and has been pining over her for about 2 years. She relents and goes out with him and Max see’s her at the club.

Happy Saturday, Spankos 🙂 In this snippet from my upcoming novella Sizzling Attraction, Madison’s father isn’t pleased with her activities. ***** “I […]

Happy Sexy Sunday to everyone! Hope you are enjoying hopping from Sexy Snippet to Sexy Snippet. I have another nummie excerpt from […]

Hey Seductive Studs bloghoppers! Happy Monday! Giving you another snippet from my just released book If You Can’t Take The Heat, the […]

Kace & Falcon have a reunion for #SatSpanks