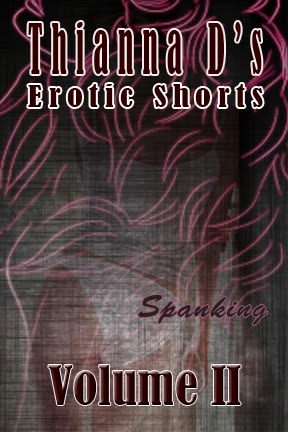 This is where the story Maybe I Was Wrong begins.

* * * *
I stared at my loving husband, trying not to laugh. But what else was I supposed to do? When Davis and I married two years ago we discussed the whole domestic discipline concept. He was for it, I was against it. But as I wanted to be his wife, I accepted it. Sure I screwed up a few times, but he always let me off easy.
Until now.
It shouldn’t have happened this way, but his mother was such a pain in my ass.
* * * *

Red, White & Blue – Cora was desperate to reconnect with her husband, so plotting with her friend Stephanie seemed the right thing to do. Until she found herself ass upward over a spanking bench.

Come To My Office – Adrienne had pushed for discipline and now she was going to get it. Who knew pain could create such passion?

Maybe I Was Wrong – Jennifer thought domestic discipline was a bit of a joke but now Davis planned to spank her. Sometimes what we fear most can turn us on faster than we can imagine.

It Was Time – Chandra was an able businesswoman, running her own successful business. Even strong women need the chance to submit to a resounding spanking.

Nobody Does That – He was insane, that was all there was too it. Threatening to spank her? Definitely insane. Until he took her in hand, over his knee, and then suddenly he wasn’t the crazy one.

Just a Fit – Terina, high-strung and emotional, hated anything that upset her well-ordered world. Thankfully she found people who help put that into perspective with a spanking or ten.

Tick Tock – Krista was used to getting upset only this time her husband Brett found out. And he has a simple way to spank that upset right out of her.

Storm’s A’ Brewing – He knew his wife and this was not her. Knowing what she needed to return to the woman she had become, he took her in hand, giving them both exactly what they needed.

Reconnect – After many years of married life, their sex life was null and void. Finally, she had decided to reveal her interest in spanking. His reaction will make or break their relationship, what will it be?

The Ties That Bind – They loved to experiment and she loved the pain. He might have found just the perfect implement to make her soar.

Yes, Ma’am – Mondays are bad, especially when your assistant quits. Having your domme show up and spank the worry out of you just might be what works. It certainly seems to work for Garrett.

Zanzabar – Dayla goes to the hottest kink club in town as her friend’s wingman. Getting a spanking never entered her mind and yet…

Wonders of the Kitchen – an excerpt from Through the Library Door – In this excerpt, Landria introduces Nicholas to the modern-day kitchen and he finds all sorts of new toys to use.

Available from these merchants.

Now go along and hop to the other spankings…I know you need more.

Morning! What a beautiful morning it is, too! And yes, just like I promised, I have coupons for my books at Smashwords. […]

UPDATE (7/3/2018) As Natural as Breathing was rewritten and republished by A Thia Thing in September 2017.

It’s another amazing #Backlist Monday and for the next three weeks, I’m featuring the books from my All They Ever Needed trilogy. […]

22 thoughts on “A Pain in My Ass #SatSpanks”