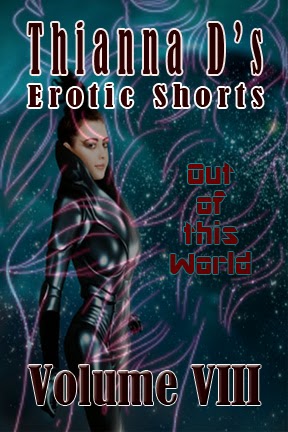 This volume is for those of you who enjoy aliens. What? Yep, that’s what I said. Aliens.

For the most up-to-date listing of where you can purchase this book, visit My author site.

The Experience: Malora, a strong Tarlanian female, is here to have some fun and to bring a male to his knees. Unfortunately things don’t turn out quite like she planned. Kinideen males are sneaky.

Assistant – You’re Hired: Kiera thought she was hired as the assistant of a wealthy man. She had no idea she would be assisting a half-human/half-octopus. His tentacles made her job a lot more fun than she expected.

Pleasure Station – Earth Girls: At Pleasure Station, you can have any kind of sex you want. Goran knows exactly what he wants and is prepared to go through anything to get it.

I’ve Been Probed: Waking up to an alien having sex with you is one thing, having it be the best sex of your life is another.

Assistant – Cherry Bark: Her favorite alien has left, and Kiera finds herself volunteering to be Rave’s assistant. Licking bark is a lot more stimulating than it sounds.

Assistant – A New Arrival: Chance, a new assistant, is introduced to his client, a cylindrical alien with thirty-two dicks who is just looking for pleasure.

Two Is Better Than One: Excerpt from Twice As Nice: Anya’s Tale – Anya learned what Peter kept from her and rejoices in having a bi-cock for a boyfriend.

Howdy Saturday Spankers & Seductive Studs & Sirens! It’s another wonderful Saturday 🙂 I have another snippet for you from Breathe Each […]

Hello Backlist Monday’ers 😀 Yeah, I missed last week – totally forgot about it 😀 This week, I thought I’d feature a […]

Happy My Sexy Saturday 🙂 Today, I don’t have anything to go with the ‘theme’ because I don’t write from music. Listening […]

Over at Spanking Romance Reviews for this day’s episode of the Took My Breath Away Book Blog Tour. I’m answering the question […]