I have the 10th coupon for my books at Smashwords. This coupon is good for about an hour and then it will expire, so if you want the book, don’t wait 😉 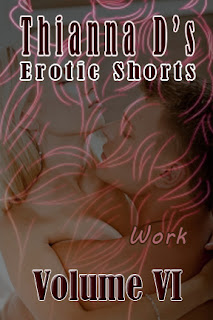 Just a Little Typo: She wanted his attention and what better way to annoy the boss than to put a rather obvious typo into his memo.

Three Per Day: The secretarial pool knew – three of them would be chosen per day to fulfill Jeremy Stadler’s lust. The question was, which way would he do it this time?

Sensual University: At this school, pleasing the teacher is considered extra-credit.

The Right Touch, Part I: Georgie needed sex but if she couldn’t have that, she would at least settle for the sensual men of The Right Touch. It may be more stimulating than she expected.

The Right Touch, Part II: As the men of The Right Touch continue to surprise her, Georgie finds out she has even more erogenous zones than she knew of.

The Right Touch, Part III: Georgie kept reminding herself that she was there for a haircut, but it was hard to concentrate on with screams of pleasure erupting all around her.

The Right Touch, Part IV: The Right Touch Titty treatment sounded great – With Lor at the healm, Georgie is launched into pleasure she had previously only dreamed of.

Wax Job: Working at a car wash might sound boring, but Niria treats each car as if it was the only one.

The Full Physical: After this physical, you may never go back to your doctor again. If only every MD was like Dr. Carrington.

Fuck This Slut: Julie is surprised to become Andrew Brayton’s personal assistant, especially considering she is not very good at her job. Until she finds out exactly what being his PA actually entails. She might be perfect for it after all.

Hi friends! For some crazy reason – my twitter account has been suspended. I have challenged it, but it is supposed to […]

Arguably, Amazon is the largest seller of ebooks. And yet…when they make it impossible for people to find your books without knowing […]

Hey, readers! It’s Kink Month over at Charley Descoteaux’s blog and I’ve written a post about one of my favorite kinks. Which […]