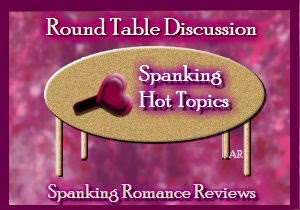 This month’s Spanking RoundTable is on Domestic Discipline and is hosted by Corinne Alexander. Some of the questions posted to get our brains into thinking gear about the topic were:

I came to DD via a slightly different path than many I talk to and what I am going to say here is probably going to get many a person’s back up…and that is not done on purpose. These are just my feelings on the subject.

D/s – and I am talking outside of the sexual context (and for the sake of ease, I am making this a two-person relationship) is about one person being ‘in charge’ and another following in a consensual dynamic relationship. They agree on the rules, the discipline (if any) that can be meted out and then if the follower (insert your chosen word: sub, bottom, brat…) breaks a rule, it is up to the one in control to enforce it by way of some sort of discipline and it is up to the follower to accept that discipline.

Now that I have that straightened out…what attracts me to DD is the fact that my definition of it fits in quite well with my submissive slave nature. I don’t just want someone to be in control of my relationship. I NEED it. It wasn’t until I was 30/31 when I found out there were others like me and that there was a name for what I was. Submissive. It was eye-opening and life-changing. Freeing, even. Two years ago when I opened up and recognized my slave nature as well, it was the ultimate freedom.

I realized there was a reason that making decisions has been the most painful for me all of my life – I just am not the type that was made for them. That isn’t a bad thing – but it is an intrinsic part of my nature. And one of the reasons I do love the loving dominant type. Strong, self-assured, loves to be in control and yet who does it with love rather than just having it be all about “Me Tarzan, You Jane. Ugh! Ugh!” (Not that that doesn’t have its appeal to, because it does. When I get wound up, I need it to be just that simple.)

For me, someone who doesn’t do D/s or Kink much outside of a committed relationship, at first those I met who called themselves DD did it for religious reasons and so I didn’t give DD any more than a cursory glance and walked away. I am not religious and won’t have anything to do with anything where rules were made up by someone else’s god. When I accepted the slave inside, I focused on an M/s relationship, though there was much about an M/s relationship that I will admit I struggled with – more so from what I have seen with men I know who are into the M/s dynamic. Then I found a wider range of DD people, people who distanced themselves from the religious view and made it about loving discipline.

But then, what makes sense to me, won’t to someone else, and that’s perfectly fine too. We all see everything through our own colored lenses, our past experiences, judgments, etc.

Now, back to my DD is a part of D/s definition. I am also kinky, and as people tend to judge anything by their definition of what something is, I prefer to say I am into loving discipline, not domestic discipline. For one thing? Just the term domestic makes me think of the 50s lifestyle kink where the woman wears dresses, does the dishes, cleans the house, pops out and takes care of the kid(s) and has a drink waiting for her husband when he gets home from work.

That would be a no. One of my hardest limits is cleaning. This girl likes things clean, but doesn’t clean. There are maid services for that 😉 Plus, can’t have kids, don’t want kids, and sure as hell don’t want to take care of someone else’s kids. Plus, I work my ass off all day writing. If he wants a hot meal done for him when he gets home and I tend to get distracted and busy? *cough* Personal chef service.

(See how people’s ideas of labels are different? Some of you probably don’t see the word domestic that way at all.)

One last thing about DD that I must say I love is the whole maintenance I idea. (but before you think that was made up by DD to be different than BDSM – uh, no. Plenty of 24/7 D/s couples use maintenance in one way or another.) But we all need to be reminded of why we are in ‘this’ kind of relationship. Maintenance reminds both the giver and receiver. A sharp reminder that no matter what else is going on: you have a huge project at work, the relatives are coming, there was something horrible that is being replayed over and over on the television…that the main thing that matters is the relationship the two of you have together. Maintenance helps create, and helps sew together the two people who are involved.

There is nothing more supremely attention getting, in a way that makes everything else disappear and crazily enough makes you closer to the person doing it, than to be spanked. Hard. Not in anger – because that has tipped the scales in the wrong way. Any guy tried to spank me in anger would find a tigress and this girl has claws.

Being spanked for maintenance or discipline is a great way to get rid of the doubts, guilt, or anything truly plaguing you. It truly is.

As an aside, I always have to smile when someone brings up ‘corner time’ as discipline. In my first D/s relationship, Sir had me stand in the corner naked for 30 minutes after getting home from work every day. That was the most amazing, freeing time. I loved and looked forward to it. It allowed me to let go of all the cares of the day, all the stress and just focus on what mattered. It was as relaxing as a good 15-minute meditation. Oh, and no. He wasn’t there to see it. But he told me to do it and so I did it. It wasn’t until years later that I realized just how brilliant his suggestion was. But when we ended our relationship, it lost its appeal. Unless commanded to do corner time? It just didn’t have the same effect.

And I miss it. Meditation is great, but the obedience to follow my partner’s coontrol? Did so much more. It was the handing over of everything to him by doing what he asked. Simple, very simple, and yet the impact? Unmeasurable. I was more assured, stood taller, and accomplished so many amazing things when he and I were together.

And in the end, isn’t that the best thing to come out of a relationship? If a certain kind of relationship makes you into the absolute best person you can be, that’s the kind you should be in.

Loving discipline with a heavy dose of bondage and a side of S&M does it for me. But it is the D/s aspect that makes it all worthwhile.

Be sure and visit the others in on this discussion. After all, it is a Round Table Discussion. Lots of different ideas/views.

With so many exciting things going on in 2017, I’m debuting the covers I have made for the books I’ve written which […]

Happy Saturday, Spankos 🙂 How’s your Saturday going? Thought I’d give you a taste from The Binds That Tie, book 1 of […]