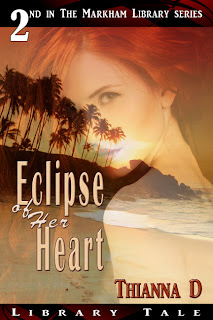 Yay! Today is launch day for Eclipse of Her Heart. Are you excited? I am. Love this story. Technically I started writing it before the 1st Markham Library tale, Through the Library Door, but that story took over for a little while. But finally, Seri and Joshuan’s story will be told.

If you have been reading along, I have been giving you the first chapter from Eclipse of Her Heart this week. Shall we continue? If you have missed any of the installments – find them:

——
Tall light gray stone walls with large imposing paintings of figures who glared down upon them. It felt as though they stood in the middle of a corridor as a long hallway went in each direction. Against the wall opposite them stood two knights made of metal. They stood, one to each side, of a wide staircase that led to the second floor.

“The bedrooms unfortunately are on the third floor,” Jennifer explained as they walked up the stairs. “I wanted to move them to the second floor, but one of the agreements to us living here was that we not change the castle. Shame really. But it does make good exercise.”

The second floor seemed to be made of large rooms that jetted off a main corridor. “This is where all the balls were held or state events,” she said as they walked to the end of the hall. “On the other end were the king’s offices. Stuffy things. I don’t know how they stood them.”

The flight to the third floor was much thinner. It was barely three times the width of Seri’s shoulders and after the width of the first staircase and the passage she had just walked down, she felt converged upon as she walked up behind Jennifer. Once they reached the third floor, though, she was pleasantly surprised at its appearance. While the first two floors appeared stuffy and old, this one was warm and inviting. The walls were painted a soft mauve and a plush tan carpet was on the floor. “With this being where we live, I insisted we be able to change some things up here.” Jennifer winked. She led Seri down a long wide corridor with windows on one side looking out on the grass and the trees beyond and doorways on the other. Jennifer rattled things off as they passed each door. As each door looked the same as the one before it, Seri wondered how she could tell.

“Guest room…craft room…Geoffrey’s study…Geoffrey’s bedroom…“Peter’s and my bedroom…and here we go,” she said as she came to the second to last door. Opening it, she waved Seri in before her.

The room wasn’t wide, but it was long, running the entire width of the castle Seri realized when she spotted the window on the opposite end. Painted in a soft yellow, the room was inviting with its off-white chairs and queen-sized bed covered in tons of pillows and a blanket in the same soft yellow. “It’s beautiful.”

“I’m glad you like it. Through here,” Jennifer opened a door Seri hadn’t even noticed, “is your bathroom. It isn’t large, but it has the basics. Sink, toilet, shower. When you want a bath, let me know. We have a divine natural spring about a mile from the house. If you use natural products, you can bathe in there. It is quite lovely.” Seri looked into her small bathroom that was also painted in the same soft yellow as the bedroom with off-white towels. She had never been somewhere so color-coordinated before. “Ah, and here is Marka.” Seri turned to see an elderly woman with shockingly white hair that fell to her waist standing in her room unpacking her bags. “She will make your bed and clean your room while you are here. If you need anything special let me or her know and we will do our best to get it.”

As Seri hadn’t brought much, her bags were unpacked quickly into a small closet and armoire. Afterward, Marka gave both her and her boss a curtsy before shuffling out of the room. “Now, are you tired?”

“A little,” Seri admitted. “But I think I am too excited to sleep.”

“Tell you what. Why don’t you rest for a while? I will send Marka up with some food and water. If you are still awake in an hour, I will give you your first tour of the library before dinner.”

Excitement zipped through her, and Seri nodded quickly. She could hardly wait to get her hands on the books. As Jennifer left and she kicked off her shoes and socks and climbed onto the wonderfully comfortable bed, she wondered if she would be able to bring any of the books to her room to read. Some books should be read in bed, she mused to herself as Marka appeared with a tray filled with juice, water, cookies and tiny sandwiches cut into triangles. “Thank you,” she smiled and Marka nodded, curtsied and left quickly.

“Good thing Mom can’t see me now,” she giggled as she curled up into the bed with her food. “She would lament I was getting spoiled rotten.”

After munching on the cookies, which she loved, and a cucumber sandwich, which she hated, she was too restless to just wait, so she checked out her bedroom. First, she went to the window to see what her vista would be. Considering the view out of the other windows, she hadn’t expected much. She was pleasantly surprised when outside her window, she saw an elaborate hedge maze just beyond the grass.

Eclipse of Her Heart

I am very excited to have the 2nd Markham Library novella, Eclipse of Her Heart coming out this week which is now […]

W is for the Wonders of the Kitchen. In my Markham Library novella Through the Library Door, Landria has found a portal […]