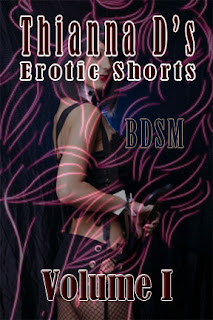 As I mentioned, I found tons of short stories/flash fictions just sitting and waiting for me to do something with them and when I gathered them all together there were so many I separated them into volumes. Today I released the first volume.

Zanzabar: Dayla goes to the hottest kink club in town as her friend’s wingman. Getting a spanking never entered her mind and yet…

Words That Are Never Spoken: Teirsa has kept something from him, something she wants to reveal and yet cannot. All she needs is to have that veneer torn off. Something he is all too willing to do.

Ritual: For Deidre, the ritual had always been a fantasy, but going through it was something completely different. Especially when tied spread-eagle to a bed.

Crave: She desired the ecstasy that came with pain and just may have found a Top who can give her so much more.

Somewhere: For a sub, sometimes it is the knowing her Dom is there where she cannot see him that makes it more exciting and intense as she waits for the lash.

Trot: He hates disappointing his mistress, but tonight she just might make his punishment fun.

Well Done: A job interview shouldn’t turn you on, except maybe when you have to watch a spanking as a test.

To And Fro: An excerpt from Bane of My Existence where Antonia gets her first real taste of watching a scene while her Master makes sure she enjoys it.

I hope you enjoy them!

Happy Saturday, Spankos 🙂 I’ve got another snippet from Don’t Mess With His Pack. Starting next week, I’ll be giving you snippets […]

Happy Saturday, Spankos 🙂 I’ve got a hot – sizzling – snippet for you today. This is from Ye Olde Kinke Faire, […]