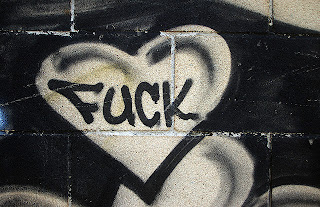 Yes, today I am going to discuss the naughtiest of all swear words (yet) – FUCK.

Growing up, I never swore…well, yes I did, but it was all the nice versions. You know the ones:

and the worst of the lot – Crap! That was my favorite especially in my twenties.

Then in my late thirties I began to write erotica.

Uh… You cannot write explicit erotica without being explicit. And the term fuck comes around a lot. As do pussy, cock, cunt… but I digress. This is my ode to Fuck. *clears throat*

To me the term fuck says it all – and no, I am not talking as a swear word. As a swear word, which I do use and personally find ambiguous at best when I used it and annoying as hell, it is nothing more than something amazing corroded. What do I mean?

When you take something good, something really, really good and demean it by making it into a swear word or a word that belittles, you corrode all that that word fully entails. Such as calling someone a pussy or cunt – HELLO! How demeaning is that?

Using Fuck as a swear word demeans the act. And I am not just talking sex. I am talking about what ‘fucking’ means. It is passion ignited, lust personified, a connection that goes further than words. Two bodies explaining in motion what they cannot put into words. I will be the first in line to complain about the term “making love”. Ugh. To me, that means slow, boring, “is it over yet?” And yet…I have come to the realization the two can go together. You can fuck and make love at the same time if it is with the right person.

But, back to Fuck. Until I developed a connection with the term, with what it meant in a purely hedonistic passionate state, it was nothing more than a disparaging word that people should be too intelligent to speak.

Yeah…I changed my opinion on that – Though not about my opinion on swearing as a hole. I think swear words are the least intelligent way to express one’s self. They are base, stupid words we use to react rather than think – and yes, I’m one of the idiots. I’m considering taking +Anastasia Vitsky ‘s advice and washing my mouth out with soap every time I swear.

I mean, seriously, I am too intelligent to use four-letter words to describe my anger. Hell, I could use words with four syllables. Gah! Soaping number 1 coming up. Do you have any idea how hard it is to punish one’s self? I would prefer I had a Top to spank me instead. *wrinkles nose*

But the term Fuck, when taken out of the swearing context, I love. Both the word and action. Thus why you will find it in my written works. I cannot think of any term that better describes an extremely tight, passionate connection between two (or more) characters. As with other words, it has become overused and is now nothing more than another word.

I wonder what the new ‘naughty word’ will be. Shall we make one up and start circulating it? Wouldn’t be the first time I have started such an odd trend – though usually that was on a local level – might be fun to create one via the internet.

And another challenge update. To bring you up to date, if you haven’t been following this challenge: I found out about a […]

Happy New Year, peeps! And a wonderful year 2014 is going to be. Are you ready for all the amazing things that […]

Rush on over to Romance Beckons where I give today’s Thursday 13, thirteen lines from my newest book, Bane of My Existence. […]

This piece I find fascinating. I created it accidentally while working with a picture of my eye and fell in love with […]