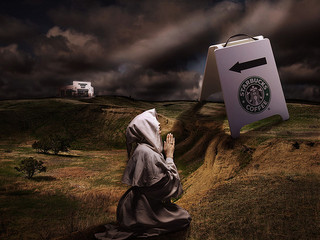 For those that do not know, I am a big believer in the Law of Attraction. How could I not be? I have seen it work in my life far too many times.

And yet, even with that, I doubt when the things I want the most do not come to fruition.

Two things occurred to me over the last couple days that opened my eyes once again to the power that law has.

The first is that one of my goals I feel so far away from – which if you know anything about the LOA makes that goal as far away as it can be. But this morning I recognized that I have suddenly began to receive a rapid rise in emails about seminars on this particular subject.

Light goes on. The universe is working. I said I want it; I feel the desire within me for it; and also feel the lack. So, the universe gives me that – the way to help me toward my desire as I do not feel as though I have it.

Of course, that brings me down in a way – as it is hard to feel an emotion you have never had before. But it clearly reminds me the universe is definitely responding to what I am putting out there.

And that brings me to the second thing that happened. Unable to write, I elected to edit a work I finished the 1st draft of in early March. Strangely enough, the main character in the novel is going through her own struggles to make things work – though hers has to do with magic.

The thing is – the answer to both of our problems is the exact same recipe.

The third and fourth are the hardest steps – but I feel lighter already. It is good to be sent reminders of what I already know.

Oops! Didn’t mean to make you faint! No, it won’t come out under this name;)

Not to sound like a broken record or anything, but I truly want to make erotica better. How? By setting a bar […]

Can you believe it? 4 Days and Counting… I previewed the first four stories – here. Today I preview the next five. […]

I have the 10th coupon for my books at Smashwords. This coupon is good for about an hour and then it will […]

6 thoughts on “Light in the Darkness”