I am pleased to turn over the reins of my blog today to Ciaran Dwynvil, who is here to introduce us to Reyach, a character in his new book In Blue Poppy Fields, a part of the Guardian Demon series. Take it away Ciaran…

Though… maybe not all as vampire stories differ greatly. Some have gloomy, horror atmosphere, some are full of blood and violence, still others brim with dark sensuality. How should you know ours would be to your liking? Apart from reading a sample chapter on Amazon or Smashwords to get a feel of the tale, you can meet the men from our world in a series of interviews given as a part of In Blue Poppy Fields release tour. Let’s first take a look at the book and then we can enjoy the interview with Reyach. 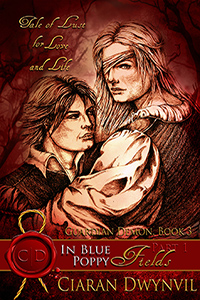 A victim to another man’s cruelty, talented and beautiful theater actor Adhemar Lebeau learned not to trust and not to love anybody but himself. Falsely accused of his master’s murder, he has to accept assistance of mysterious Count Sanyi Arany to later discover his savior is a vampire. Forced both by a fatal illness and aftershocks of torture experienced during his unjust imprisonment, Adhemar agrees to the only possible cure. Rebirth.

Happy Saturday spankos! My Corbin’s Bend Book A Good Family Man has just been released, but I thought I’d give a little […]

Blake Takes Some HeatPart 1 of The Blake/Dusty ChroniclesSuccessful and yet very alone, Blake works hard – almost to the point of […]

Feminism & Spanking You know. When I signed up for this round table on Feminism and Spanking, I was all “Cool! I […]

Welcome to another wonderful #CSSundays (Coming Soon Sundays) post. I’ve read one other Meg Harding book and absolutely loved it. Just from […]

2 thoughts on “Meet Reyach, a character from In Blue Poppy Fields by Ciaran Dwynvil”