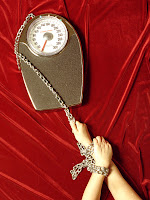 Hello, friends. Thought I would give you an update on the whole Garcinia Cambogia (GC) thing.

Okay, I’ve been on GC since March 26th. Two weeks.

First off – I sleep better for the most part (And as an insomniac that’s saying somehing) and I wake up earlier and with more energy.

Second – we aren’t going to be seeing weight numbers, because I don’t believe in them. As the vitamin works and changes my body so that it stops making fat cells and increases my energy, I will be building more muscle tone and as muscle tone weighs more than fat… well, you can see how that could totally put the kabosh on anything/everything if you are consistently checking your weight.

Third – I am drinking a lot of water. I don’t know if the vitamin itself dries me out, or if it is just the increase in energy as my metabolism works harder… but whatever the reason, I drink a lot of water.

But, of course, I have been watching for size difference. As the fat cells burn off, that is what Dr. Oz said to look for – going down in clothes size.

So, I am seeing a distinct change. My stomach is not as hard. It has softened up a little which it does when I lose weight – in fact, standing up, I look down and it’s flatter than normal. Some of my underwear is now too big (woot woot!) and keeps slithering down. And… my breasts are smaller.

So, so far so good! Will update again in a couple weeks…

This week has been an eye-opener for me. I have been working hard, 16-20 hour days for months to get things done, […]

Hey, Santa! It’s been awhile. Well, yeah. I thought you would appreciate a whole summer without me bugging you. Don’t you just […]