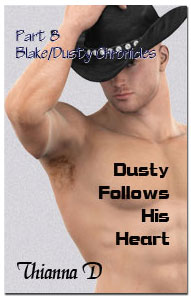 Happy Saturday Seductive Studs! You’ve been waiting all week long for this, I know *wink*.

Today I give you an excerpt from Part 8 of The Blake/Dusty Chronicles, Dusty Follows His Heart. Next week you get an excerpt of Part 9 – Blake Makes a Move which will be released this Thursday, March 14th. (Or if you want a sneak peek now, check out last week‘s and this week‘s Saturday Spankings posts.

Dusty and Blake have developed a relationship that is part D/s and part boyfriends. In this excerpt, they are about to make love for the first time and Dusty surprises himself by telling Blake that he loves him.

Up until that moment, I hadn’t been sure. Now that I had said the words, though, I knew them to be true. I loved this beautiful man. How the hell did that happen?

“I love you too,” he said quietly, catching my attention.

Looking into his bright eyes, I grinned. “Well, that is a good thing, baby,” I said huskily as I reached over and kissed him. “A very good thing.” As I went to move in between his legs, I froze. “Ah, fuck!”

“What?” he gasped, half sitting up.

“Hold on there, Blake. I need to get condoms and lube out of my bag.”

He burst out laughing, grabbing on to my arms. I raised an eyebrow at him, but instead of making him calm down, it make him laugh louder. “Blake?” I said with a warning note in my voice.

His laughter calmed down and he grinned. “You are really cute when you get frustrated,” he chuckled, half turning and opened the drawer to his side table, pulling out a packet of condoms and a bottle of lube. Rolling my eyes, I smacked his ass which was still half up, making him yipe.

Snickering, he handed me the condoms and lube. “Anything else you need, oh wise one?” he asked in amusement.

Shaking my head, I met his twinkling eyes. “Brat.”

Although delayed, Dusty reaches Washington in time for Blake to come home. As they settle into a temporary full-time D/s relationship, boundaries are pushed, secrets are revealed, and Dusty realizes just how much Blake means to him.

Happy Saturday, fellow SatSpanks and Seductive Studs and Sirens Bloghoppers! Are you having a nice and rosy day? This week I am […]

I have watched Hybrid Vigor Film on their quest to meet a $50,000 goal for their film. It has been exciting to […]

And now, for today’s Backlist Monday post, I’m giving you the finale of the All They Ever Needed series: Breathe Each Other […]

The books have been waiting forever for one person to break the spell. It will be broken on February 7th. Through the […]