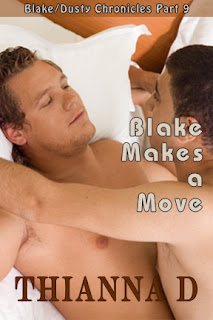 Hey fellow Saturday Seductive Studs followers! Another day of scintillating M/M erotica is ahead. (And don’t you just love that?)

I hope you have enjoyed the look into each of the Blake/Dusty Chronicles over the last 8 weeks. Today I give you ‘Blake Makes a Move‘, part 9 of the series which just came out two days ago.

The time with Dusty in Seattle had brought the two of them together in a lasting way. Only, now Blake has recovered from his accident and has to return to Portland and work. This scene is the beginning of their last night together before Dusty leaves for Austin. I wish I could give you the whole scene, but for now…

He held out his hand and I quickly rose to my feet and took it. We walked down the stairs and the first thing I noticed were the fast food bags sitting on the coffee table.

“Fast food?” I chuckled as he pulled me over onto a sofa covered in a blanket.

“Yep. The last ‘first date’ I went on, I was nineteen,” he explained, ripping open the bags and pulling out tons of sandwiches and fries. “Since then, I have gotten to know my subs through clubs. In a way, dating is overlooked. I thought tonight I would ‘take’ my boyfriend on a date.”

“To McDonalds?” I asked amused, even as I moaned at my first bite of a Big Mac.

“We know one another. And isn’t this better than some fancy-shmancy dinner we would have to sit at the dining table for?” he asked as he pulled me close.

Smiling, I nodded as I took another bite. “What all did you get?” There were seven bags of food.

“One of each of their meals as well as several of their apple pies. Damn, I love those things.”

“How many people are you feeding?”

Believe it or not, Dusty even makes fast food romantic. You wouldn’t believe what a night he has planned for Blake. *sigh*

And by the way, yes the title fit, but for those who aren’t ‘in the know’ that is the beginning of the Big Mac song. “Two all beef patties, special sauce, lettuce, cheese, pickles, onions on a sesame seed bun.”

Blake Makes a Move
Part 9 of The Blake/Dusty Chronicles

Time with Dusty has been life-changing for Blake and he does not want it to end. Their last week together cements their relationship in more ways than he can comprehend.

Even though Dusty asks him to come visit him in Austin, something holds Blake back. When everything comes to a head, will he leap? Or stay where it is safe?

Buy it now for your Kindle:

Red Band Erotica Collection is still underway, but thanks to one of my favorite authors, I clued into the fact that getting […]

What happened? Are you ready for this? Okay, so for those who don’t know what the hell I am talking about – […]

Happy Saturday Spanking day! With my newest Corbin’s Bend book coming out on October 8th, I’m giving snippets of it for both […]