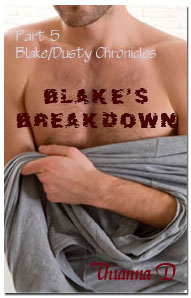 Happy Saturday everyone! Have you checked out Saturday Seductive Studs? Every Saturday authors of m/m erotica post 200-word snippets of their work, either published or a work in progress.

If you have been following along, I have been giving you a look into the Blake/Dusty Chronicles every week, leading up to the release of the last two in March and April. This week it is time for Part 5, Blake’s Breakdown.

Blake is 40-years old and suffers from overwhelming guilt that he only allows himself to give into once a year. His parents were killed in a freak auto-accident when he was fifteen and he actually believes it was his fault even though it wasn’t. In this snippet, he has crashed and reached rock bottom, only to be found by his father-figure Brian and Dusty, who just found out that his online sub was actually Blake. They have just informed Blake of that fact right after he ‘confessed’ his supposed sin.

Dusty was Sir. Horror burst that pressure that had been building in my chest for days. No, no, no, no. Now Sir would know what a horrid individual I was. I killed my own parents. No, no, no, no. “No,” I moaned, curling into myself. Now I wouldn’t even have Sir to turn to. No Brian. No Theresa. No Sir. My mind shut off and images flashed through my mind of what my parents last expressions must have looked like as their truck flew over the embankment. I sunk back into the hole that was my hell.

A blast of cold water made me yell, “FUCK!” as my eyes flashed open. Dusty was holding me against his naked chest under the cold water in my shower. I stared at him in shock for a few seconds, but soon the cold made me shiver.

“You going to stay with us?” he asked calmly. I nodded, my teeth starting to chatter. The water shut off and both he and Brian stripped me of my clothes and wrapped me in a warm towel. Once I was fairly dry, he stripped off his own wet clothing, wrapped a towel around his hips and then picked me up as though I weighed nothing and took me into the bedroom, sitting me on the bed.

This snippet was from Blake’s Breakdown, Part 5 of The Blake/Dusty Chronicles.

Every year on the anniversary of his parents’ deaths, Blake grieves – though usually he does it in private. Thrust into pain even he did not know he was capable of, Blake completely breaks down, unaware there is help on the way in the form of Sir. Will he accept the help Sir offers?

Blakes’ Breakdown is available from:

A tantalizing snippet from Making His Stand for #SatSpanks

A tempting little snippet from The Binds That Tie for #SatSpanks

Happy Spanks to you! (Ooh, weird flash back, I just had the Roy Rogers theme going through my head and that was […]