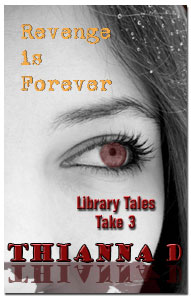 Welcome fellow spanksters:) Another Spanking Saturday is upon us – something we’ve been waiting all week for.

Camilia is sent to live with a guardian she does not even know exists after her parents die unexpectedly. He’s bossy, intense, and rather secretive. On her first night at his castle, she gets a taste of his rules when she corrects him on her name – she prefers to be called Cami rather than Camilia. He doesn’t take that well.

Swats? He was going to spank her? He had to be ki-

“OUCH!” she cried out as his hand came in contact with her jeans-covered buttocks. It left a sting behind. “That hurt!”

This library tale takes place in a castle in the Scottish Highlands where Camilia finds out her guardian, the man who has been spanking her in his private library for four years for perceived transgressions, is in fact a vampire.

Join Camilia as she fights against the irresistible draw to the vampire who controls her every move. When she thinks she has won, she finds out she has lost everything. How long can revenge last when she now has to obey more than one master?

This is unlike any of my other Library Tales… Dark, foreboding and full of blood-drinking vampires

Q is for Auntie Q today for the Spanking From A to Z Challenge. Who is Auntie Q? Why Auntie Q is […]

16 thoughts on “Ouch! That hurt! #satspanks”