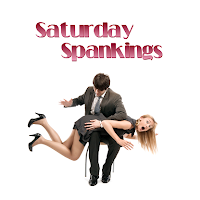 The command made her shiver and she tried not to grin as her pussy contracted and began to leak. When his voice took on a commanding tone, it definitely made her hot. Briefly she wondered if they made men like him in the twenty-first century, but her thinking was derailed as he pulled her slowly to his right side and then patted his lap. Her eyes fell on his cock, which was semi-hard and she licked her lips as she bent stiffly over his lap, grinning as his cock brushed up against her side.

“Aack!” she squeaked when he grasped her hips and pulled her further so that her ass stuck up in the air and her hands almost touched the floor. Well, this was embarrassing. Before she could ask if this was normal, he moved one leg and trapped hers between both of his.

Through the Library Door is available in eFormat as well as regular and large-print paperback. You can find them:

Now go ahead and check out some other Saturday Spankings.

This blog has been amazing and has morphed into an amazing journey for me. Of course, it is also my author site. […]

Since Eclipse of Her Heart is coming out in less than 8 days now available! (YAY!), I thought I would start letting you […]

Yes, Today is release day! WOOT WOOT! As of now, you can get Through the Library Door in ePub, mobi, paperback and […]

8 thoughts on “Remove the Towel – #SatSpanks”