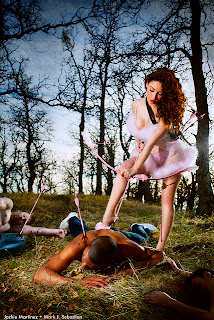 Now, don’t get your knickers in a twist.

First, you must understand that Valentine’s Day is a myth, a myth created by a catholic pope in the hopes of curing Rome of its vile/hedonistic behavior.

Mid-February from February 13th-15th, Rome celebrated the pagan festival Lupercalia. The celebration was a way to banish evil spirits and promote fertility.

The festival began with the sacrifice by the head pagan priest of two male goats and a dog.

A feast followed, after which young men cut pieces of skins from the goats and ran around the city with pieces of animal skin in their hands that they used to whip anyone they came close to. Women would line up at the city walls to get lashed by them, supposedly to ensure fertility and to ease the pain of childbirth. (Sounds like fun to me.)

In the 5th century, when christianity had taken over Rome and paganism was outlawed, the pope of that time did what other popes did before him. He took a pagan holiday and christianized it. He proclaimed February 14th a day of love.

If we went back before Lupercalia, it grew out of Februa, which was a Spring cleansing ritual – which incidentally is why this month is actually called February (Februarius).

Now to the facts – Valentine’s Day is advertised as a day of love. We have all been brought up with that idea – that if you are loved, then you will get one of the following on Feb 14th:

What do any of those have to do with love?

This has become the ultimate commercial holiday. This isn’t about love, its about how to make a buck!

How many women out there complain because their husband/boyfriend waited until the last moment and then brought home some lame gift… just because it is V-day and he knows he will be in trouble if he doesn’t so he picks up the first thing he sees on the way home?
How many men have to deal with the sudden ‘if you love her/him, you will BUY ‘this’ for them this February 14th’?

How many people sit home alone knowing they will NOT be receiving anything this season?

What happened to showing you love someone just for the fucking hell of it? Let’s be honest. It MEANS more if you do something because you don’t HAVE to.
So, let’s banish Valentine’s day. Why?

Wouldn’t it be better to celebrate love when it really means something?

There is a song in Alice in Wonderland. “A Very Merry Unbirthday to Us.” Maybe we need to start celebrating a “Very Happy Non-Valentine’s Day”.

Love should be boundless and from the heart. Valentine’s day is exclusionary and is a veritable commercial nightmare. End the madness. Stop celebrating Valentine’s Day. Instead, celebrate love 365 days a year.

How about going back to Lupercalia? Take out the sacrificing of the animals, put some whips in some hands and that sounds like a fun night out…

PS – I am all for getting Lupercalia reinstated. Who’s with me?

Welcome to the Black Friday Blog Hop! Today is Black Friday – what are you doing? Hopefully hopping through the 200+ authors […]

With Finding Their Bliss now out, it’s on a whirlwind 3-day book blog tour. Brent & Char might get dizzy 😉 Today, […]

This piece I find fascinating. I created it accidentally while working with a picture of my eye and fell in love with […]

Hello everyone! A happy, sexy Sunday to you all! Welcome to the fun. What fun you say? *gasp* Where authors/bloggers give you […]