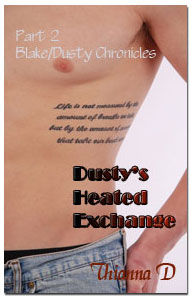 Hey – it’s another Saturday Seductive Studs! Continuing last week’s idea, today I am introducing you to Dusty… or Sir, as Blake Calls him. Dusty’s Heated Exchange is the 2nd story in the Blake/Dusty Chronicles.

“Are you okay?” I asked softly as he sat up.

He grinned cheekily. “I’d use the word spectacular myself.”

Chuckling, I ruffled his hair. “Well, if you are ready, I need to remove that plug and give you a rub down.”

He beamed and nodded. We walked over to a bench and I had him lay down on his stomach. Once he was comfortable, I retrieved my items from Josie, hugging her in thanks and then returned to his side. I pulled out some oil and slowly messaged his arms and legs, working through any kinks he might have developed. The fact his body was getting turned on did not escape my notice. I then worked in some salve into the areas I had spanked. His moan had me chuckling. There was one thing left to do and I knew if I timed it right, I could give him another orgasm. I moved my hand down and massaged his balls, becoming turned on when he started letting out little whimpers. “You like that, boy?” I asked softly and he nodded, whimpering. When they started to tighten, I knew the time had come. At the exact same time, I pulled out the plug and lightly smacked his balls. He cried out as another rough orgasm ripped through him.

Dusty’s Heated Exchange is 2nd in the 10-part Blake/Dusty Chronicles. I am excited to say that #9 is written and #10 is halfway written. They will be released in March & April.

Buy it for your Kindle on Amazon

Today I’m giving you a snippet from one of my books. It comes out on Thursday. Excerpt: “Good morning, Alpha,” Killian said […]

A tempting little snippet from The Binds That Tie for #SatSpanks

You’re gonna love this coupon – from one of my fav books I’ve wrote. This coupon is good for about an hour […]

As we know, the official Six Sentence Sunday ended as of last week. But, there have been a few bloghops that have […]