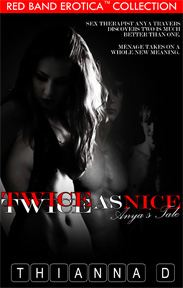 So where did I come up with the idea of a man with two cocks, anyway?

I wish I had a clear-cut answer for you.

This story had a lot of starts and stops. I would write… re-write… begin again and always end up at the same spot.

Well, for those that aren’t familiar with the story… first an overview:

Sex therapist Anya Travers doesn’t have many complaints about her lover. Peter is attentive and loves to bring her multiple orgasms. Unfortunately, so far, he hasn’t been willing to give her one thing. And that one thing she wants one more than anything.

So, back to my question – what spot in the story kept bringing me up short? Why would Peter not have sex with Anya? The part in the story where he is about to reveal why is where I would stop each time as I could not figure out a good reason. Then, one day I was going through my own personal fetish/kink list and it hit me. DP! (for those that don’t know, DP stands for double penetration.) From there it flowed.

It seemed natural that the reason Peter had never shown his body to Anya was that he was from another dimension where men had two cocks. Dealing with earth females, he learned quickly they would reject him – as such, he preferred not to show his two appendages to his girlfriend.

From there, the rest of the story wrote itself. And left one very sexually satisfied Anya.

I don’t think its fair she has a whole dimension of men with two cocks to play with all by herself, do you?

Ever get the feeling we waste a tremendous amount of energy on the wrong things? For decades, people focused on the cold […]

Originally, I hadn’t planned on releasing this yet, but I decided… why the hell not? Valentine’s Day is the day for lovers. […]

Today I am excited to feature an excerpt from PJ Adams new book The Object of His Desire. This is one hot, […]

Whew! Wonderful Saturday! Let’s see… For those who are waiting for it. Blake’s Breakdown, part 5 of The Blake/Dusty Chronicles will be […]