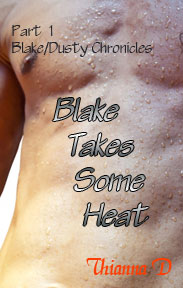 Well, that is a bit of an intriguing question. I never read gay fiction until 3-4 years ago I guess. Before I started reading them, I wrote a Twilight fanfic. Now, most of the time when I am writing, I know who is going to end up with whom. I didn’t then. It was my first fanfic and I ended up pairing Jasper with Carlisle.

From then on, I began to read more and more slash fanfiction, finally turning to gay fiction.

When I started Blake Takes Some Heat, I had no idea where it would go, or that it would morph into the Blake/Dusty Chronicles. I put my pen to paper and Blake came to life.

Blake is a man in the midst of a mid-life crisis. He is about to turn forty, unmarried, and doesn’t have much time to date. But he has a secret. Online he is able to be the submissive he truly is to a Dom he knows by the name of KeepingItReal. His Sir sometimes is the only one who can help him de-stress.

He is bisexual and while he has no problem with that, he does worry about how his family would react if he ended up with a man. I could not write a weak Blake. He has no shame in being a sub and enjoys submitting to Sir. In his work life, he is a take-charge employee who has done well for himself… unfortunately, he doesn’t really enjoy his job.

As Dusty asked to speak (and I put that lightly because Dusty is all Dom and he didn’t ask so much as tell me he would have his say) and the series began to take shape, I knew I needed to give Blake an issue that only Sir could help him overcome.

Prentice “Dusty” Brandon runs a business he created. He is imaginative, smart,  dominant and has a delightful dry sense of humor. He is also gay. And he hates the real name his Mama gave him. *snicker* Which is why I bring it up.

He is Blake’s perfect other half. He rarely gets upset, is quick to correct things he sees that are wrong, and has the ability to accept without judgement. Of course, he also can be a vengeful prick at times and would like nothing more than to rip apart the Domme who hurt Blake two decades ago. He also has a bit of a love affair with his car… but don’t tell him I said so.

While he is dominant, he is also a romantic at heart (which you will see a lot of over the next two books).

These two boys have come to mean a lot to me and it is hard to end the series. But I hope you will like the way I end it, because I am pretty tickled pink with it:)

Get to know this new edition of Light in the Dark Night. Now under the author name: Thianna Durston.

Happy Saturday everyone! Hope you have been suitably spanked. If not, make sure you visit every author who takes part in the […]

Hi friends and fans:) Just a small note – I am gearing up for a heavy month in July and am apt […]

My thoughts on putting layers of personality into books #writing