And here we are with another fabulous Six Sentence Sunday! 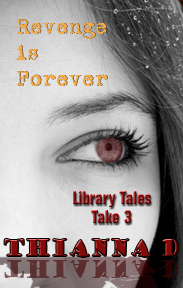 This Sunday I am giving you a sneak preview into Revenge is Forever, the third in the Library Tales series which will be released this coming Wednesday, November 14th.

In this book, vampires are a naturally cruel species. To them humans are nothing more than walking/talking blood bags. Once mature enough that they don’t kill everything they drink from, vampires tend to capture humans, bleeding them a little daily or weekly, using their bodies for their pleasure until they die. They are known as vessels. Once a vessel, that individual lives only to serve their master.

Camilia has been forced into the life of a vessel by her guardian Blayton and no matter how badly she is treated, she refuses to give him the one thing he demands from all his vessels. This scene takes place after she finally realizes what she is to him.

After that her days became monotonous. Elixer six times, steak three times, fucked into oblivion at least once. Over and over, day after day, until she had no idea how long she had been there or even who she was most of the time. And yet, even as her weakness and her desire for him increased, so did the desire to remember who she had been. Because of that one need, she was able to deny him the one thing he insisted on from his vessels and had never been denied before.
Her complete surrender.
Book Description:
Library Tales: Take 3 Revenge is Forever
Genre: Explicit Paranormal Erotica
This library tale is darker than the other Library Tales. It also does not contain BDSM. Instead, this tale takes place in a castle in the Scottish Highlands where Camilia finds out her guardian, the man who has been spanking her ass in his private library for four years for perceived transgressions, is in fact a vampire.
Join Camilia as she fights against the irresistible draw to the vampire who controls her every move. When she thinks she has won, she finds out she has lost everything. How long can revenge last when she now has to obey more than him?
Coming November 14th.

I’m giving you another snippet for today’s Seductive Studs & Sirens from Forbidden, an anthology of taboo erotica. Today I am giving […]

This design was inspired by my friend Eli, who humourously called himself The Public Sadist one day. With it being an election […]

The phrase sound easy, doesn’t it? Be yourself. But which “yourself” are you supposed to be? The you that you are? Or […]

4 thoughts on “Six Sunday – I see Vampires ahead”