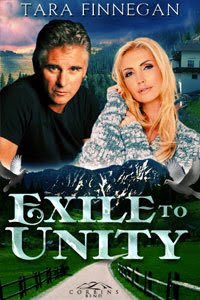 Exile to Unity, Book Three in the Corbin’s Bend contemporary DD Romance series is now available! A wonderful romance written by +Tara Finnegan about a married couple who has been through some rough stuff and move to Corbin’s Bend to try and get back on track. Does it work?

Well, today you can find out 🙂 I kidnapped Tara and am holding her hostage so she can tell the tale. Don’t worry. I fed her milk and cookies.

Thanks a million, Thianna. Not just for having me here today, but for including me in the Corbin’s Bend series. I think it’s an incredibly exciting concept, and I loved reaping the rewards of working with characters already in existence. I have to thank you for Carla, and Emily for Maeve, whom became my most important secondary characters. Writing this was a lot of fun, I tried to imagine they were my neighbours, and how they might interact.

* * * * *
She now knew that there were risks attached to a lot of what they had done, especially in pregnancy. They had neither studied nor discussed what they were doing; they simply did what brought them pleasure. Heck, it was a committed relationship, and totally consensual so who the hell cared?
Well, apparently, junior in her tummy had cared and so too had a dipsy, interfering midwife. In spite of her attempt to switch off the action replay, Ange was back to that night, and the full aftershocks arising from it. The effect of pregnancy on her pigmentation had led to excessive bruising and the nurse questioned Ange about the marks on her bum while administering the steroids. Ange said she had fallen. Within twenty four hours, she had a premature baby boy born by emergency C-section and woke to a visit from the police encouraging her to take charges for assault against her husband. Trying to explain that it was all bedroom fun nearly drove her to insanity.
Jim was being questioned at the same time and gave the same story. Only for the fact that during her very minimal online research she had read that it was wise to have written confirmation of her consent, the police would probably have brought a domestic abuse case against her will and subpoenaed her to testify against her own husband, as the law permitted. When she told them about the letter, and said Jim could present it at any time, they quit harassing her but it was too late, enough of a stir had been caused and the midwife had told several people.
Jim was a fairly well-known figure. Two all-Ireland Gaelic football medals had made him something of a local hero in Kerry. As a result the whole story hit the tabloids, totally ruining Angela’s life. And while they were fairly sure it was the midwife, Ange could never prove who had leaked it. She could picture ex-students all over the place pissing themselves laughing, at her expense. She could see the morning’s headlines already.
BDSM Teacher Taught a Lesson. Or worse yet…
What was this woman teaching your children?
Or
Lessons in Lust.
The damn possibilities were endless and each one seemed more cringe-worthy. “Stop, love, it’ll do no good,” Jim said, as if reading her mind.
It was all right for him to talk. Hell, it just made him Mr. Joe Cool in the eyes of the world. As an ex-Kerry footballer, the world expected him to be a bit of a lad. If anything, being known as a bit of a tiger in the bedroom gave him more kudos.
He ushered her protectively into the waiting car. She could see his fists rolled in balls, only dying to lash out at the prying paparazzi. Ange gathered whatever self-control she could, not for her sake, but purely to prevent Jim thwacking a camera bearing arse-hole thus playing right into their hands and proving to the world that he was a psycho. Although he had not wanted her to take the case, on the grounds that there would be way too much publicity, he had been at her side the whole way in spite of this.
* * * * *

Ange soon learns that in this new environment,  Jim is not beyond chastising her with a good sound spanking as the couple face their past demons and try to recover the closeness they once shared.  New challenges soon face the couple.  Will their difficulties destroy them or can their move be what Ange initially hoped for, an exile to unity?

Accidental writer from the west of Ireland, Tara likes to write about strong, feisty modern day heroines who meet their match with even stronger spanking heroes where the sparks will fly.

When not writing, she is a wife, mother, taxi-service, gofer and general finder of lost items!

You can find her at:

The rest of the Corbin’s Bend series

Corbin’s Bend #6: A Brush of Violet by Corinne Alexander

Writing is my passion. Publishing is also one of my passions along with travel, intelligent conversation, and helping others. Job hunting however? […]

Anyone who knows me knows I fight hard for LGBT rights. My way of thinking is – nobody should be excluded. We […]